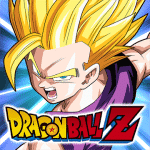 ◎Make your own Dragon Ball dream team!◎
Train your favorite characters and Awaken them to new realms of power!
Organize your team by Categories and Types and assemble the ultimate fighting force!

◎The world of Dragon Ball is your battlefield!◎
The timeline has been thrown into chaos, bringing you face-to-face with characters from across the ages…
But you’re not in this alone! Trunks, hero from the future, will fight by your side!
Explore the board game-style map and enjoy an all-new story with your favorite characters!

◎The world of Dragon Ball is yours to explore!◎
Relive the anime action in Story Events! Face off against tough enemies in Dokkan Events and the World Tournament!
And for true hardened fighters, the challenges of Extreme Z-Battle and Super Battle Road await!
Get pumped–there’s no stop to the action in Dragon Ball Z Dokkan Battle!

By downloading or installing this app, you agree to the BANDAI NAMCO Entertainment Terms of Service.

Note:
This game contains some items available for in-app purchase that can enhance gameplay and speed up your progress. In-app purchases can be disabled in your device settings, see
https://support.google.com/googleplay/answer/1626831?hl=en for more details.

This application is distributed under the official rights from the license holder.

Powered by “CRIWARE”.
CRIWARE is a trademark of CRI Middleware Co., Ltd.

The game includes elements of Board game, Collectible card game, and Puzzle genres. The main game is made up of levels that work similarly to board games, with spots dedicated to items, power-ups, traps, and fights. During the fights, the player’s characters fight with an enemy via a puzzle system similar to match-3 games. Multiple orbs of different colours are placed between the player’s character and the enemy, and the player can match a different kind of orbs to do attacks or use other abilities. The characters with which to fight in game are unlocked via either in-game items or in-app purchases.